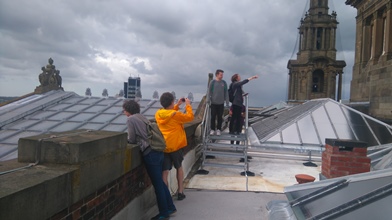 Drop into the Harris Museum to meet artists from The Birley artist studios in Preston and talk to them about their work.  There will be peformances by Martin Hamblen, Tao Lashley-Burnley and Rachel Pursglove and a talk by Benedict Rutherford.  New video work by Mat Birchall will be on display all day and you can take part in artist’s boardgames by Steph Fletcher.

See below for talk and performance times.

Steph Fletcher has created a series of board games inspired by those in in the Harris Museum’s social history collection.  Available to play in the ground floor Makerspace, they focus on local concerns over land rights in Lancashire – such as ‘Jam’s Garden’ in Preston – and wider issues such as fracking.

Fletcher’s work explores the social, political and ecological systems and structures we inhabit and how we navigate through them or try to understand our roles within them. Her work often takes the form of drawing, performance, intervention and socially-engaged works. For this residency, she is interested in exploring processes of ‘decision making’ in communities, and experiences of ‘uncertainty’ in daily life – in work, leisure, and social relationships as well as local/global politics.

Benedict Rutherford has researched the library and social history collection. The work produced from this research will include elements of printmaking and sculpture. Rutherford’s work investigates constructed systems, social norms and conventions, distribution of information and semantics. He is inspired by the optimism and utopianism that has been present within Russian Constructivist and the Arts and Crafts movements. Rutherford is interested in finding connections between seemingly unrelated texts and objects in order to adapt and reimagine their significance and relevance. His particular interests lie in histories of social conditions of, local production processes and economy in Preston.

Additionally he has collected flyers and leaflets available in the museum to re-imagine the ways in which these can guide visitors on their own navigation and experience of the museum. He has produced a limited series of abstract prints inspired by information leaflets for distribution via the leaflet holders in the museum.

Tao Lashley-Burnley has used the library and history collections to create new abstract text based works/poems that will be inserted into books throughout the library for visitors to happen upon. Alongside these works will be a number of drawings influenced by the archives and also created from spending time in the library and reference room. He would like visitors to take them away, use them as bookmarks, re-insert them into other books. The pieces will be documented before placing into books to create a catalogue. This catalogue will be displayed in cases in the library.

He has also created T-shirts designs inspired by buildings around the Harris to be worn by Visitor Services Assistants.

At 2.00pm Lashley–Burnley will be performing Backchat, a talk comprised of written texts discussing the navigation and orientation of space combined with extracts from museum’s library archive that reference architecture and buildings. The work is both a response to the museum’s surroundings and a philosophical enquiry into the origin of our ideas of the sublime and beautiful. This work will be recited backwards.

Martin Hamblen has produced new work called FoolooF, a palindrome performance. It will be performed for two hours; one hour either side of midday on April Fool’s Day. Sitting on the ring balcony, Hamblen will wear yellow as a reference to James Gunn’s well-known painting from the Harris, Pauline in the Yellow Dress (1944). He will bake and serve Pauline’s Punts from a Butlins souvenir tray, small cherry and coconut cakes inspired by his Grandma, who was also called Pauline.

Mat Birchall will show five digital videos displayed on monitors situated around the museum. Shot on a basic digital camera the footage depicts video sketches of liminal spaces such as corridors, shelving units, piping and air vents around the Harris.

Rachel Pursglove will perform A Repetitive Task – a nonsensical performance about the repetitive action of doing something over and over, again and again. In this instance, performing the actions of folding clothes, practicing the high visual standards of retail folding techniques.

Cost? Free
Do I need to book in advance? No, just drop in.

The Birley Project Space & Studios is based just a few hundred yards from the Harris and hosts exhibitions, residencies, live events, off-site projects and workshops. It nurtures contemporary practice by local, national and international artists, supporting them in testing new ideas, developing collaborations and taking an experimental approach to practice.

Established in September 2014, The Birley was set up by Post Post CIC, a not-for-profit organisation made up of recent graduates.

It is supported by Preston City Council, Northern Lights at UCLan, In Certain Places and UnLtd.