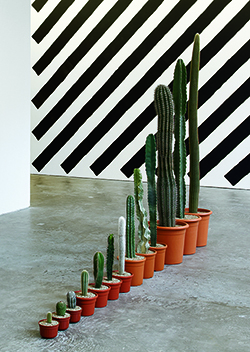 Martin Creed is one of the most influential and exciting British artists today, who uses sculpture, neon, painting, video and performance. Awarded the Turner Prize in 2001, he was also chosen to welcome the 2012 London Olympics with a UK-wide bell-ringing performance, from Big Ben to bicycle bells.

The exhibition includes Work No. 203: EVERYTHING IS GOING TO BE ALRIGHT (1999) on the front of the Grade 1 listed Harris building.

This ARTIST ROOMS exhibition features an eclectic range of Creed’s work, and we are delighted to show several of his works for the first time outside London. We are also the first gallery to show Work No. 960 (2008), an installation of 13 cactus plants, since the artist donated it to ARTIST ROOMS, together with another recent gift to the collection, Work No. 1340 (2012): a large-scale painting of diagonal stripes that is applied directly onto the gallery wall.

Visitors can experience one of Creed’s best known installations, the Turner Prize-winning Work No. 227: The lights going on and off (2000). The exhibition will also include Work No 1701 (2013), a video work accompanied by Creed’s soundtrack ‘You Return’ and Work No 2316 (2015), a multi-coloured neon piece that spells out ‘Coconuts’, as well as a series of recent portrait paintings together with other significant loans from Tate and private lenders.

About Martin Creed
Martin Creed, born in 1968, is one of the most important and exciting artists practising in the UK today. He won the Turner Prize in 2001 and his participative performance Work No. 1197: All the Bells (2012) united people across the country in a celebration to welcome London Olympics in 2012.

Creed’s work is characterised by his playful and subversive wit. This exhibition features a range of his sculpture, neon, painting and video engaging with ideas around rhythm and repetition.

A musician as well as an artist, he has said ‘I’ve often consciously tried to make my work more like music … rhythm, whether musical or visual, is a comfort’.

He is renowned for his straightforward approach to making art and his clever economy of means, both in his use of non-traditional art materials and in the numerical titling of his work. Assigning a number to every artwork made relieves him of the tendency to make judgements based on size or materials, thereby giving all his works equal status.

Creed has commented that his artworks are an attempt to start a dialogue with people. This is perhaps best conveyed in one of his most emotive pieces installed on the front of the Harris building, neon sculpture Work No. 203: EVERYTHING IS GOING TO BE ALRIGHT (1999)

ARTIST ROOMS is a collection of international modern and contemporary art owned by the National Galleries of Scotland and Tate on behalf of the public.

The collection was established in 2008 through the d’Offay Donation with the assistance of the Heritage Memorial Fund, Art Fund and the Scottish and British governments. More than 1,600 works in the collection by 40 artists are shared with Associate museums and galleries around the UK through ARTIST ROOMS On Tour, which is a partnership until 2019 with lead Associate Ferens Art Gallery, supported by the National Lottery through Arts Council England, Art Fund and the National Lottery through Creative Scotland.

ARTIST ROOMS: Martin Creed builds on the legacy of the 2014 ARTIST ROOMS exhibition of work by Bruce Nauman at the Harris. Since the touring programme began in 2009, more than 40 million visitors have enjoyed ARTIST ROOMS exhibitions in their hometowns to date including Preston, and over 60,000 young people have had the chance to explore work by some of the most important artists of the twentieth and twenty-first centuries through creative learning projects.

Image: Martin Creed, Work No. 960 (2008). ARTIST ROOMS Presented by the artist jointly to National Galleries of Scotland and Tate and acquired with assistance of the ARTIST ROOMS Endowment, supported by the Henry Moore Foundation and Tate Members 2016. Courtesy the artist and Hauser & Wirth. © Martin Creed. Photographer Stuart Whipps