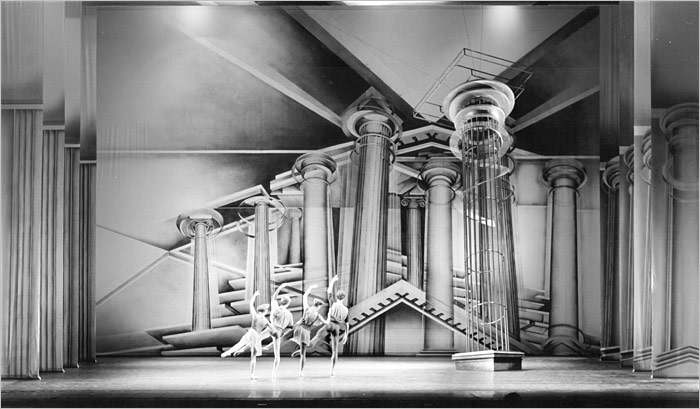 Deanna Petherbridge writes about drawing and her designs for ‘A Broken set of Rules’ a ballet performed at Covent Garden in 1984.

I am an artist who has worked in pen and ink on paper most of my life, on drawings that often suggest architecture and the built environment, partly observed but mostly imagined.When I was young and determined to go to art school, my father tried to persuade me that architecture would be much more respectable and provide me with a ‘proper’ income. (He was probably right about the second part!) I do often laugh at the irony of this, because one day I gave up thick paint and soft sculptures and romantic-looking themes and began to use a fine pen and a ruler. Other people, more used to pencil drawings of portraits or observed landscapes, would ask me whether I had trained as an architect.

Changing from painting and sculpture to line drawing also developed because I used to travel a lot on a tiny budget. Unable to afford a camera in those early days, a sketchbook was an essential part of my kit.  And it satisfied my belief – which I still hold – that the careful and slow looking required for drawing is the most intense way of discovering and belonging to the world.  I remember going to Tunisia in the 1960s and drawing kilns in a pottery-making village. Soon the wonderful geometric white-washed houses with hidden courtyards that people lived in became of absorbing interest. I recorded in a few lines how traditional village houses built from rough stones presented minute differences in the placing of blue doors and tiny shuttered windows or the shapely variations of a domed or a barrel-vaulted roof sculpted out of mud and whitewash.

Through ‘variation in unity’ these simple geometric structures evoked the lives of the people who built and lived in them. The white of the drawing paper could also be interpreted as the emptiness of the desert or the brightness of North African and Mediterranean light.

In Britain I was impressed and also saddened by the decaying immensity of grand Lancashire mills, the elaborate cast-iron structures of bridges over canals and railways, and the threatened warehouses of Manchester city centre. I drew my versions of these engineering structures because they were rich in history and human use, as well as being complex and beautiful. 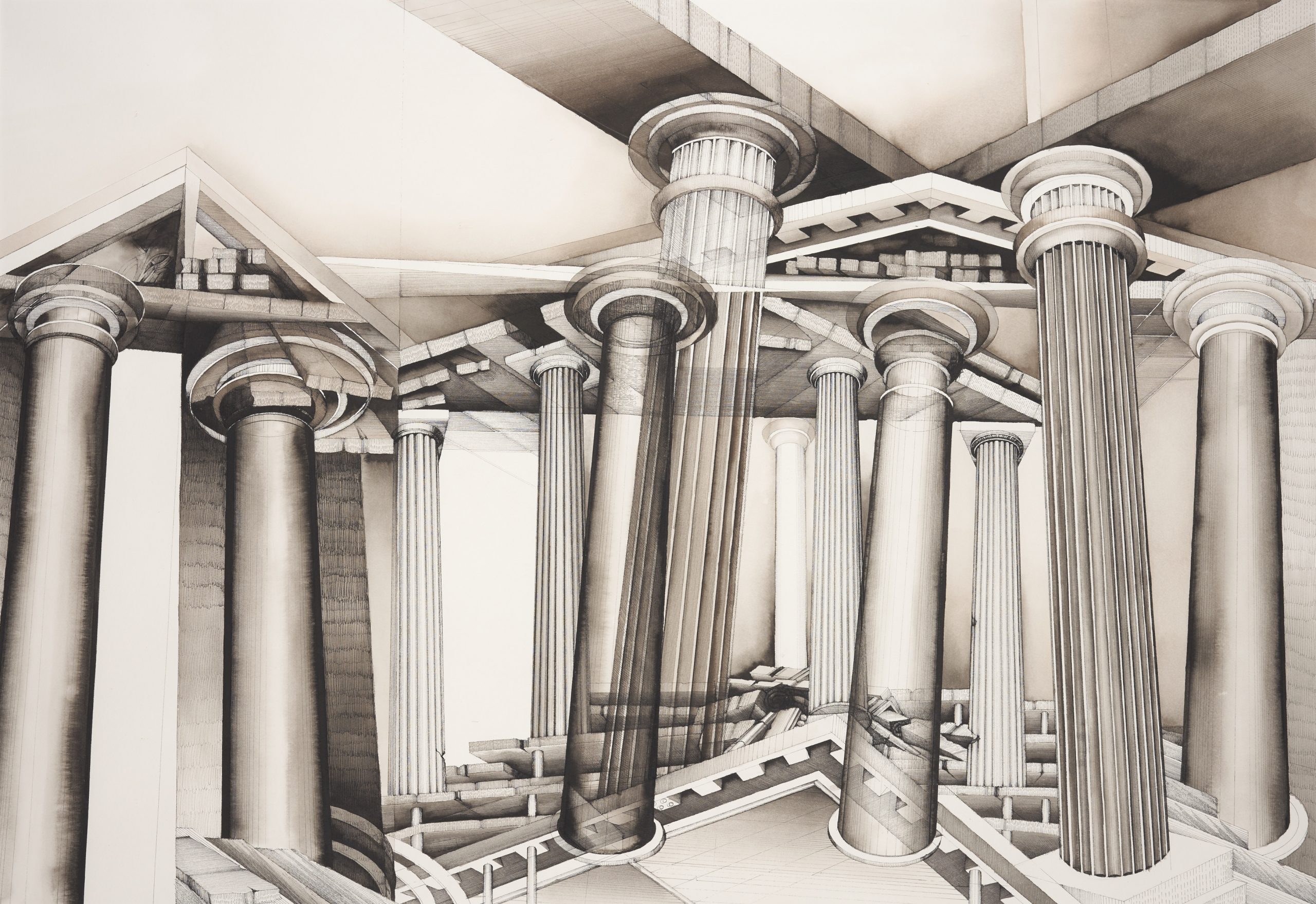 This must have been why I was invited to collaborate with the dancer Ashley Page and design the sets and costumes for his first short ballet for the Royal Ballet at Covent Garden, London in 1984. Having never worked in the theatre before, I was as fascinated with observing how Ashley invented his steps on the bodies of his young company dancers as with our conversations with composer Michael Nyman, and the shared discussions of how we might each do something to shake up ideas of ‘classical’ language. That is classical ballet, classical music and classical architecture. The idea was that we would stand things on their heads as well as evoking something known and familiar, and I applied this to reinventing a Grecian temple and its gateways for the backdrop in a ridiculous but also disturbing manner. 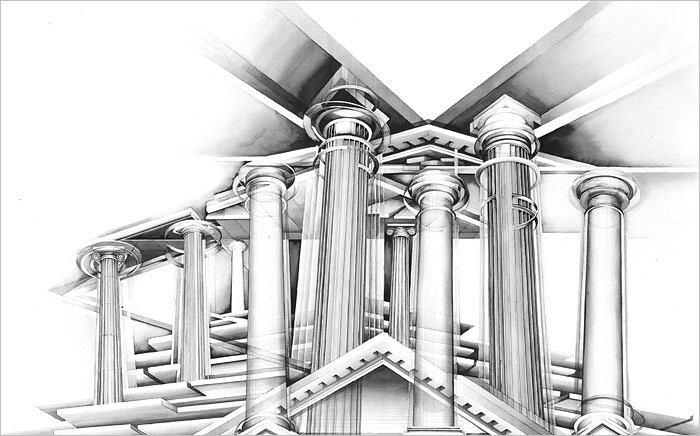 All of this is a rather round-about way to explain why my drawing on display at the Harris looks the way it does! The columns in the drawing are at funny angles, whereas of course a temple, or any stone structure needs upright supports.

Some of the views seem to be as if one is looking up at tall columns supporting stone roof panels or triangular pediments from below. But there are also some columns viewed ‘straight on’ from the front, as if mounting the steps of a temple.

And some of the columns are transparent, while a wonky pediment that should be at roof level is now resting on the ground.

This was the first drawing, and it was followed up with a much simpler and larger version (also in the Harris collection) which was copied on to a backcloth for the enormous stage of Covent Garden.  For the actual performance, there was a huge free-standing column on the stage made of shiny aluminium rods like drawn lines, so that one could see through it to the backdrop, and the vaguely ‘classical’ draped costumes included transparent head-pieces and other weird details  Because the drawing lacked colour, the matching costumes were in shades of grey and the only colour was the bright red-hair wigs of the dancers.

A Broken Set of Rules, 1984, The Royal Ballet, Covent Garden, London. Photograph courtesy of the artist.

In The Artful Line exhibition, my drawing from 1984 has been placed, cleverly, next to an elaborate brown ink drawing of a classical building by Giuseppe Galli Bibiena, or someone working close to him, of about 1740.

There were many generations of the Italian Galli Bibiena family working in the theatre and producing wonderfully complex architecture backdrops for operas and ballets. However, the brothers Antonio and Giuseppe, employed by the Habsburg Court in Vienna and other parts of the Austro-Hungarian empire, were the most distinguished and versatile.

Those were the centuries when theatre designers (scenographers) would also organise and design elaborate weddings, funerals or court festivities for which temporary design sets or painted facades would be set up as backgrounds for choreographed activities: a form of living theatre in which people directly participated.

In Baroque theatres of the seventeenth and early eighteenth centuries, illusionistic backdrops would depict angled cityscapes, colonnades, courtyards and the domed interiors of buildings, employing the most elaborate perspectives, as in this drawing on display.

The sketches and engraved designs for these complex architectural fantasies are often all that remain of these grand events (which might have been painted in colour), but their elaborate detail conveys all the richness of columns, capitals, staircases, balconies and impossible recessions.

These were places for gods and goddesses to come down from the clouds, Kings and Queens to indulge in love or betrayal, heroes to slash each other with their swords and sorceresses to conjure up magic to the sound of lightning and thunder. 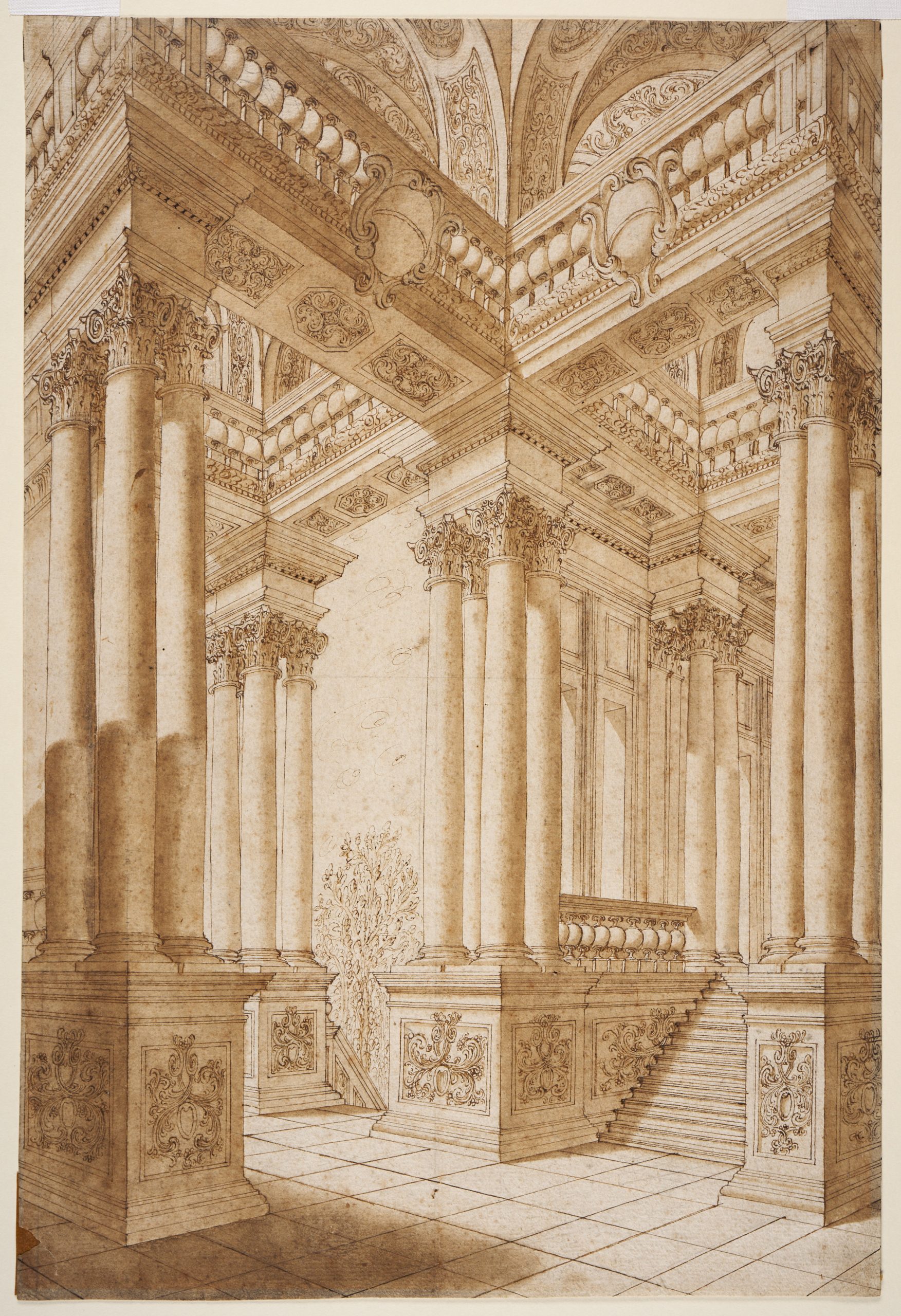 Obviously, the intention of my 1984 ballet set for Ashley Page was a send-up of this ancient tradition of monochrome set-designs.  The ballet score by Michael Nyman, based on baroque themes by Henry Purcell, had originally been commissioned for the film The Draughtsmans’ Contract, 1982 directed by Peter Greenaway as a mysterious period piece set in 1694 with plenty of polite sex and non-so-polite violence.  Like the film, the 1980s were a time for discovering and playing with history … just as Baroque theatre and opera had played with ancient classical myths and restaged them for the audiences of the day.

Drawing is in many ways a timeless medium, and architecture has always depended as much on drawn ideas as the solid materials of its constructions. But when drawings move on to gallery walls or the backs of theatre stages or cinema projections, they can become the blueprints of fantasy.

I have described the background of how and why the work was made, but what it suggests to lookers and readers is entirely up to you. 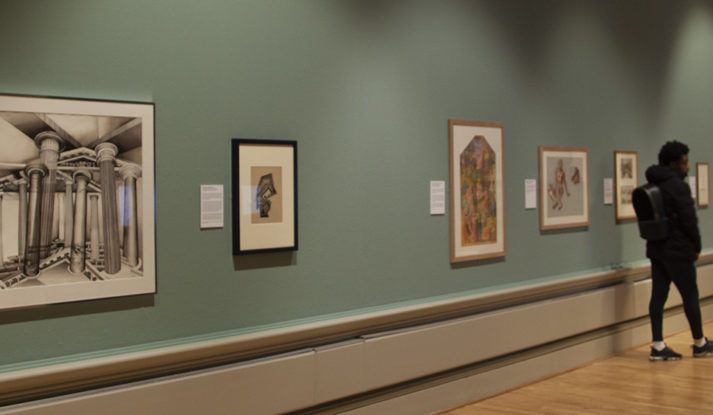 Explore drawing in all its forms. Visit our digital exhibition ‘The Artful Line’ created in partnership with the Courtauld Gallery.

Explore the Harris from the comfort of your own home