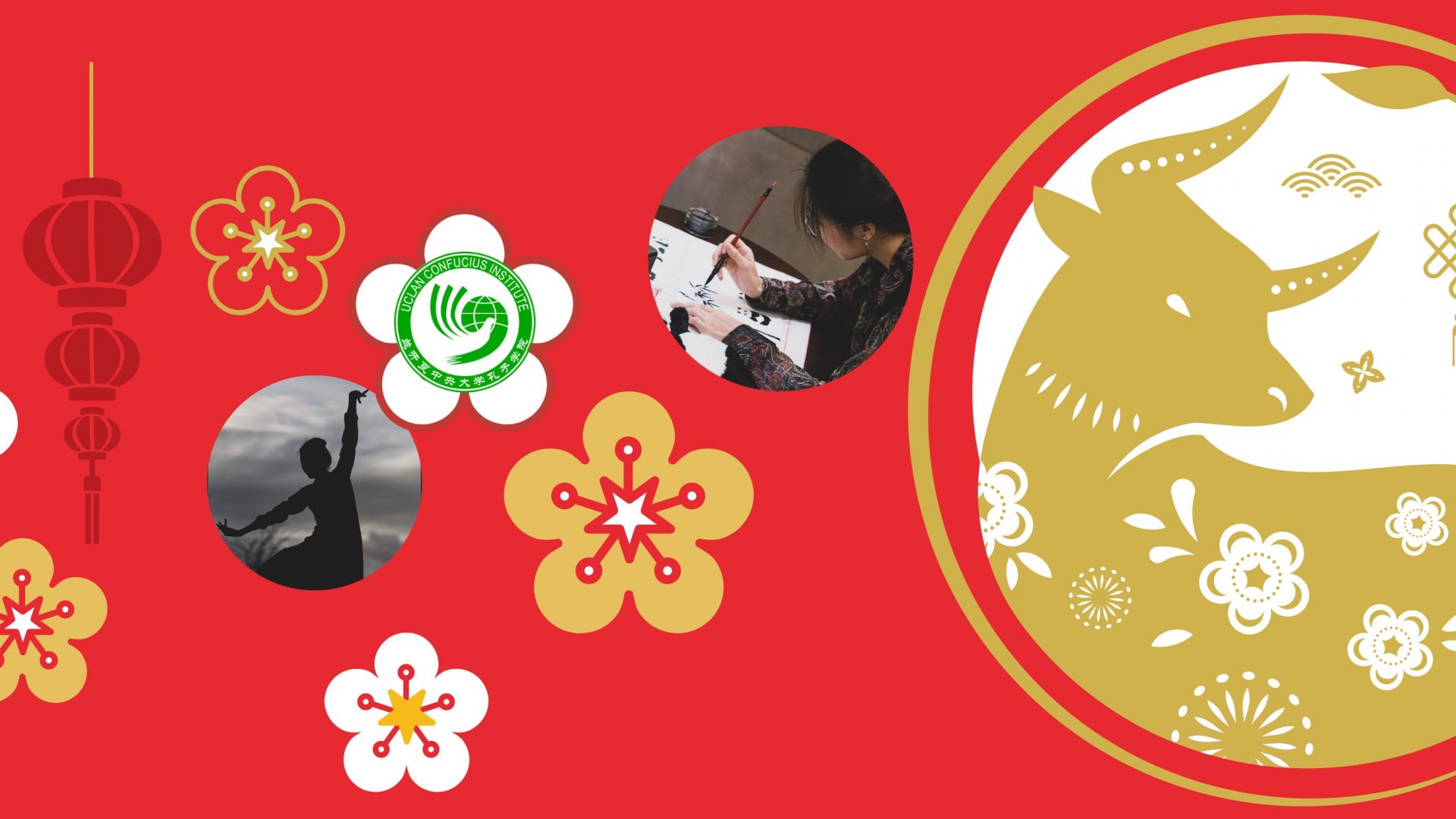 Join us as we celebrate the year of the Ox with UCLan Confucius Institute.

We’ve put together a variety of videos and activities to help you celebrate at home.

The UCLan Confucius Institute started in 2008 at the University of Central Lancashire. They broaden the cultural flavour and landscape of Preston by giving people a unique taste of Chinese culture as well as valuable opportunities to learn Mandarin Chinese.

The story of Chinese New Year with Hong Liang

Learn about the spring festival, animals of the Chinese Zodiac, the legend of Nian and much more…

Dr Frank Pearson introduces us to some historic Chinese books.

Close up photos of some of the books 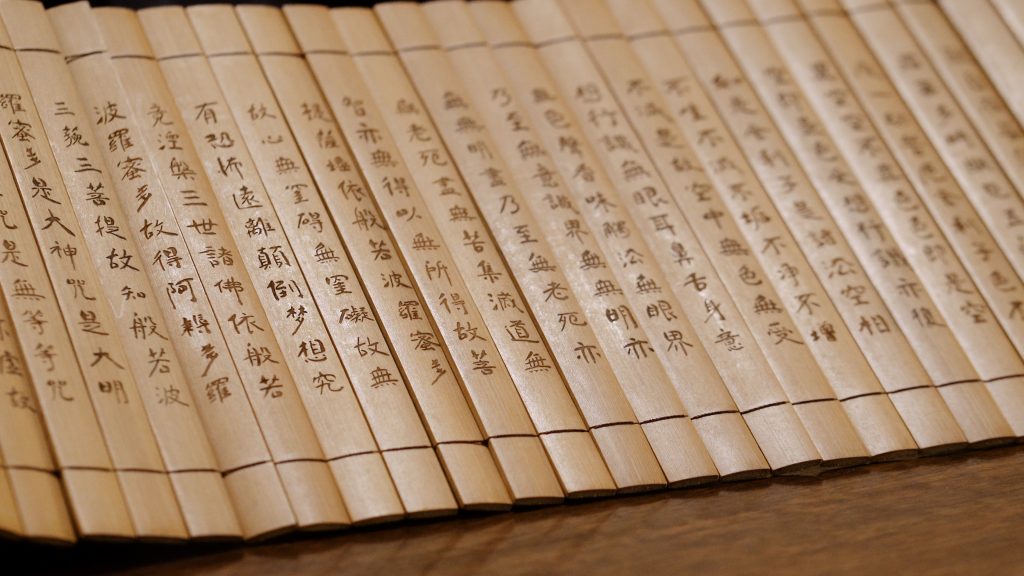 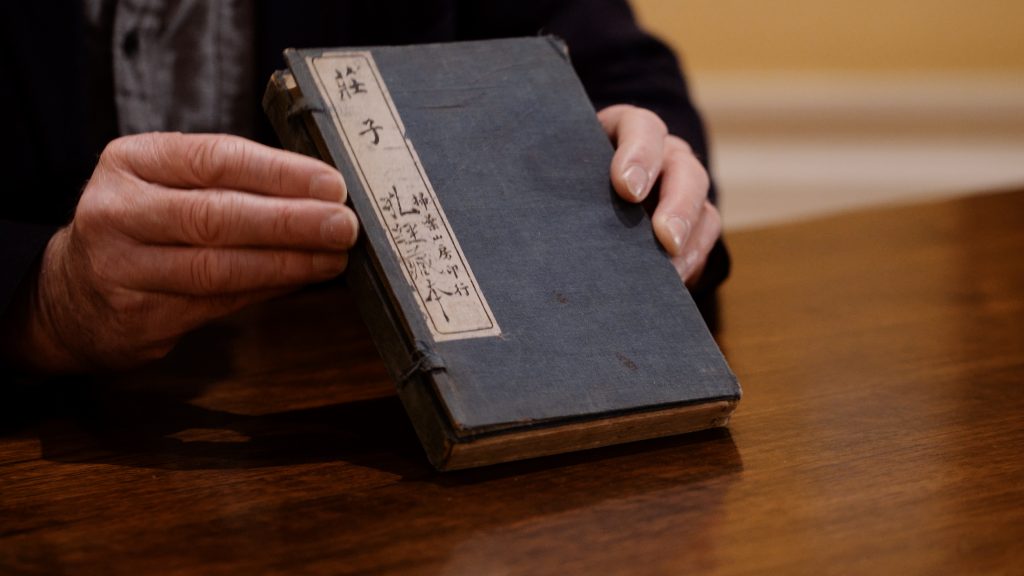 Time for Tea with Feixia Yu

Feixia Yu of UCLan Confucius Institute introduces us to Chinese tea for #ChineseNewYear
We’ll look at different types of tea, the utensils used to prepare them and the customs linked to tea drinking.

Although the winter is cold, it contains infinite vitality. The deeply buried seeds are still breathing, dancing, and growing in silence, waiting for the arrival of spring… 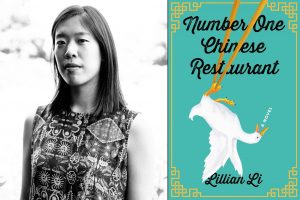 Have you visited our online library yet? We have a range of adult and children’s books by Chinese authors ready for you to borrow.

You can borrow an ebook or audio book on Borrowbox (titles in red below) or you can reserve a book for collection (titles in orange below).

Hold Up the Sky - Cixin Liu

Hold Up the Sky - Cixin Liu

From the author of The Three-Body Problem, a collection of award-winning short stories – a breath-taking selection of diamond-hard science fiction.

In Hold Up the Sky, Cixin Liu takes us across time and space, from a rural mountain community where elementary students must use physics to prevent an alien invasion; to coal mines in northern China where new technology will either save lives or unleash a fire that will burn for centuries; to a time very much like our own, when superstring computers predict our every move; to 10,000 years in the future, when humanity is finally able to begin anew; to the very collapse of the universe itself.

The popular Beijing Duck House in Rockville, Maryland, has been serving devoted regulars for decades, but behind the staff’s professional smiles simmer tensions, heartaches and grudges from decades of bustling restaurant life.

Beautiful, dreamlike, and utterly intoxicating, Braised Pork is the beguiling debut of an outstandingly talented young writer who is based in China but writes in English.

One autumn morning, Jia Jia walks into the bathroom of her lavish Beijing apartment to find her husband dead. One minute she was breakfasting with him and packing for an upcoming trip, the next, she finds him motionless in their half-full bathtub. Like something out of a dream, next to the tub Jia Jia discovers a pencil sketch of a strange watery figure, an image that swims into Jia Jia’s mind and won’t leave.

As the country battled through a hundred years of wars, revolutions and seismic transformations, the three Soong sisters from Shanghai were at the centre of power, and each of them left an indelible mark on history.

Red Sister, Ching-ling, married the ‘Father of China’, Sun Yat-sen, and rose to be Mao’s vice-chair.

Big Sister, Ei-ling, became Chiang’s unofficial main adviser – and made herself one of China’s richest women.

All three sisters enjoyed tremendous privilege and glory, but also endured constant mortal danger. They showed great courage and experienced passionate love, as well as despair and heartbreak. They remained close emotionally, even when they embraced opposing political camps and Ching-ling dedicated herself to destroying her two sisters’ worlds.

Big Sister, Little Sister, Red Sister is a gripping story of love, war, intrigue, bravery, glamour and betrayal, which takes us on a sweeping journey from Canton to Hawaii to New York, from exiles’ quarters in Japan and Berlin to secret meeting rooms in Moscow, and from the compounds of the Communist elite in Beijing to the corridors of power in democratic Taiwan. In a group biography that is by turns intimate and epic, Jung Chang reveals the lives of three extraordinary women who helped shape twentieth-century China.

The Hidden Girl and Other Stories - Ken Liu

The Hidden Girl and Other Stories - Ken Liu

Ken Liu is one of the most lauded short story writers of our time. This collection includes a selection of his latest science fiction and fantasy stories over the last five years – sixteen of his best – plus a new novelette.

In addition to these seventeen selections, The Hidden Girl and Other Stories also features an excerpt from book three in the Dandelion Dynasty series, The Veiled Throne.

They’re called parachutes: teenagers dropped off to live in private homes and study in the United States while their wealthy parents remain in Asia. Claire Wang never thought she’d be one of them, until her parents pluck her from her privileged life in Shanghai and enroll her at a high school in California.

Suddenly she finds herself living in a stranger’s house, with no one to tell her what to do for the first time in her life. She soon embraces her newfound freedom, especially when the hottest and most eligible parachute, Jay, asks her out.

Few books have had such an impact as Wild Swans: a popular bestseller which has sold more than 13 million copies and a critically acclaimed history of China; a tragic tale of nightmarish cruelty and an uplifting story of bravery and survival.

Through the story of three generations of women in her own family – the grandmother given to the warlord as a concubine, the Communist mother and the daughter herself – Jung Chang reveals the epic history of China’s twentieth century. Breathtaking in its scope, unforgettable in its descriptions, this is a masterpiece which is extraordinary in every way.

Ching-He Huang is one of the brightest stars in modern Chinese cooking in the UK. Each week in her new BBC2 series she re-invents the nation’s favourite Chinese dishes, modernising them with fresh, easy to buy ingredients, and offering simple practical tips and techniques. These are brought together in this beautiful book to accompany the series. Drawing on the experiences of top chefs, her family and friends, growers and producers and celebrity enthusiasts Ching sets out to discover the best Chinese cooking in the UK today, introducing easy-to-make Chinese food to sometimes resistant Brits, and painting a picture of modern Anglo-Chinese life in the UK as she goes.

Once upon a time in the East: a story of growing up - Xiaolu Guo

Once upon a time in the East: a story of growing up - Xiaolu Guo

Winner of the National Book Critics Circle Award in Autobiography 2017
Novelist Xiaolu Guo writes the extraordinary story of her childhood in rural China, her young adulthood in the Beijing underground and her move to the West in search of freedom of expression.

Xiaolu Guo meets her parents for the first time when she is almost seven. They are strangers to her.

When she is born in 1973, her parents hand her over to a childless peasant couple in the mountains. Aged two, and suffering from malnutrition on a diet of yam leaves, they leave Xiaolu with her illiterate grandparents in a fishing village on the East China Sea.

Once Upon a Time in the East takes Xiaolu from a run-down shack to film school in a rapidly changing Beijing, navigating the everyday peculiarity of modern China: censorship, underground art, Western boyfriends. In 2002 she leaves Beijing on a scholarship to study in Britain. Now, after a decade in Europe, her tale of East to West resonates with the insight that can only come from someone who is both an outsider and at home.

Xiaolu Guo is an award-winning Chinese-born author, screenwriter and film maker based in the UK.

Being vegan or vegetarian, or wanting to reduce your meat intake, doesn’t mean missing out on fantastic takeaway favourites. ‘The Veggie Chinese Takeaway Cookbook’ offers over 70 amazing meat-free recipes, most of which can easily be made vegan. Kwoklyn Wan has spent his life cooking in Chinese restaurants and knows how to make your home recipes taste just like the takeaway

Yikang's day: from dawn to dusk in a Chinese city - Sungwan So

Yikang's day: from dawn to dusk in a Chinese city - Sungwan So

Yikang lives with her parents in Changzhi city. Her mother wakes her at 7 o’clock and after breakfast her father gives her a lift to school on the back of his bicycle. When school is over for the day Yikang and her parents sit down to dinner of rice and stir fried Chinese celery with doufu (bean curd). After dinner, Yikang practices her English letters. At about 10, she kisses her mother and father goodnight and goes to bed. Yikang, Wanan! (Goodnight, Yikang!)

This book is part of the series A Child’s Day, photographic information books concentrating on the daily lives and experiences of children in countries around the world, published in association with Oxfam

Chinese Porcelain at the Harris

Free creative activities for all the family delivered to your door. 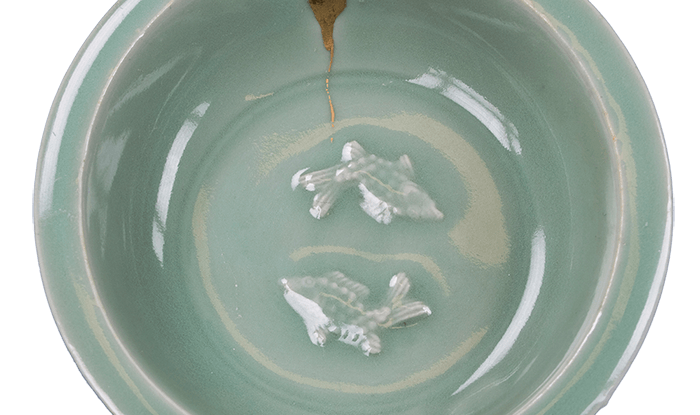 This Chinese porcelain bowl made over 1000 years ago celebrates imperfection – whether in life, love or pots. 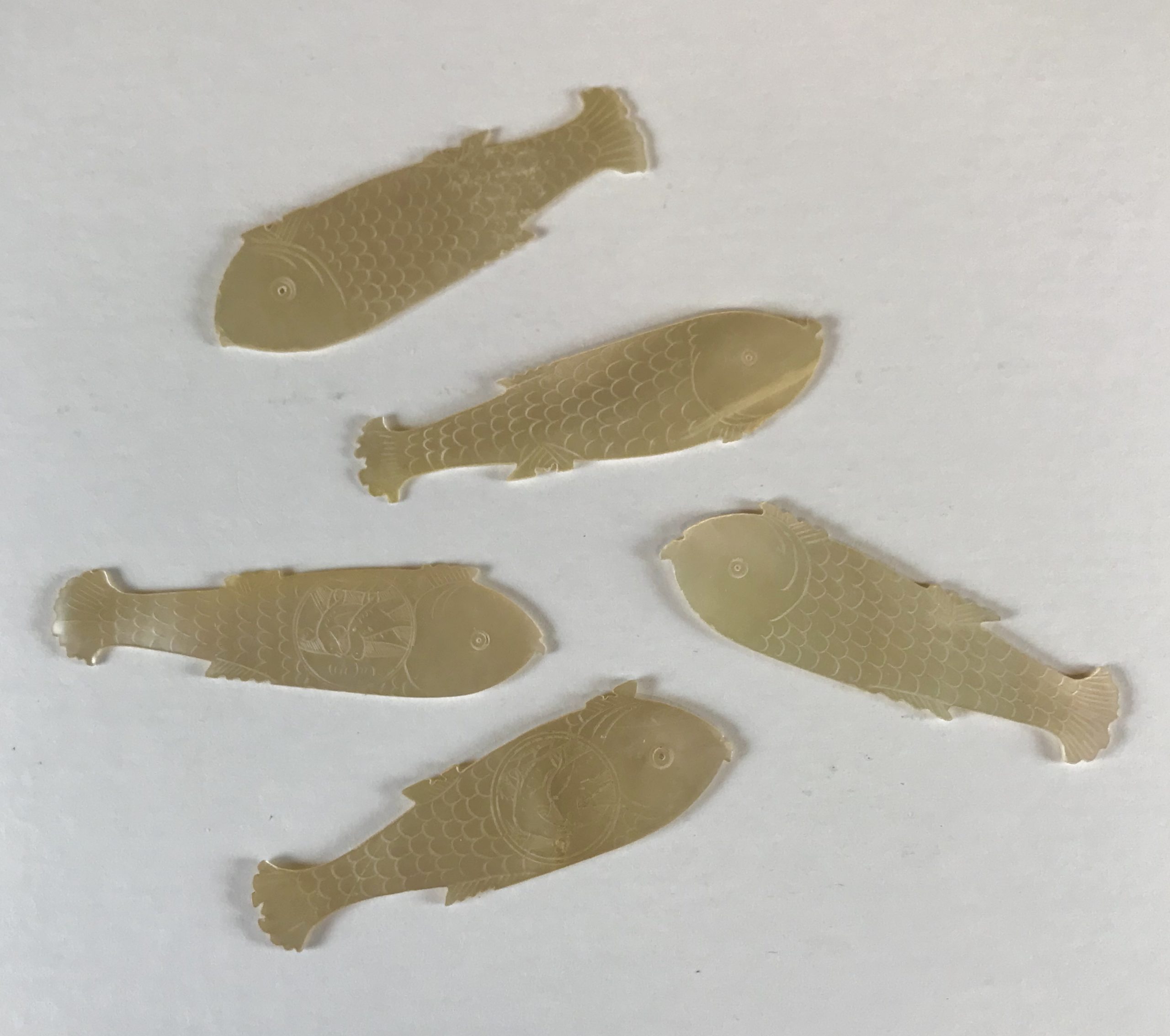 Balzac and The Little Chinese Seamstress By Dai Sijie

Our library staff review this beautifully written novel set in China at beginning of the 1970’s.