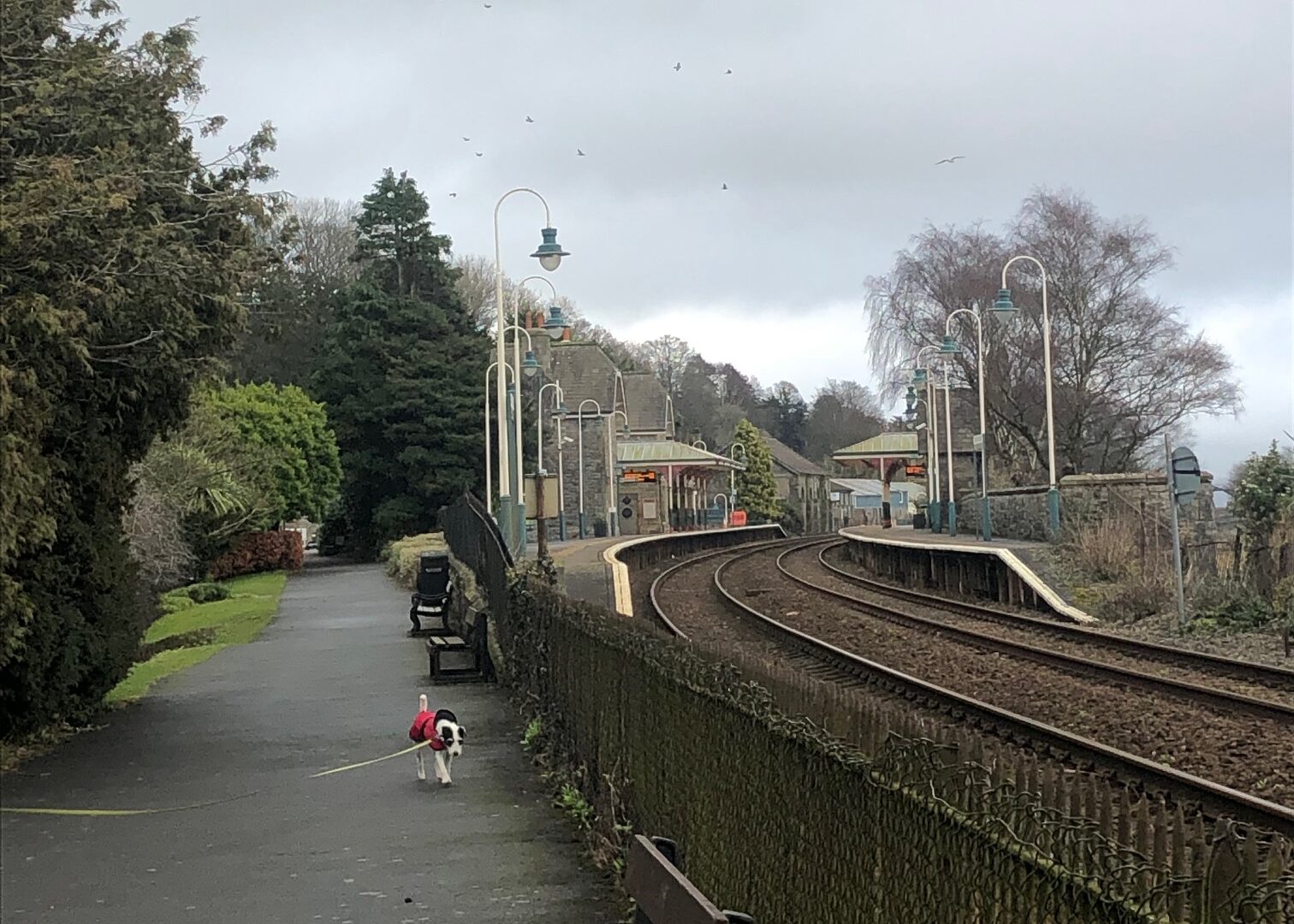 Book 7 of our North West Reads is a story of love and regret set on the edge of Morecambe Bay.

When Annette Clifford, a single woman in her fifties, enters her childhood home in Grange over Sands that she had recently inherited from her deceased stepmother, it is not only childhood memories that are stirred up. The ghosts of her parents, Jack and Netty, are drawn from their state of non-existence back to the house, a place they had ran in life as a boarding house up to the early 1960s. They observe their daughter as she explores the now very dilapidated and damp house but she cannot see or hear them, though they would dearly like to communicate with her. They are aware of their failings as parents when Annette was a child which they would like to make up for, but they are unable to do anything but watch her.

Netty and Jack can see earlier timelines at the house and are able to observe the shadowy movements of one resident in particular, Timothy Richardson, who had had a profound influence on their lives. Through these different timelines we learn why Annette has ended up with the life she has; an itinerant single life, having only colleagues but no friends, estranged from her father (who had died six years earlier) and from her late stepmother, Candy.

It’s winter and the house is cold and damp. Annette wanders through the house finding the remains of her parent’s possessions broken, dirty or rotten. The poor state of the house is not helped by the two large Sycamores, after which the house is named, growing near it and undermining the foundations. Annette has no wish to keep the house but is aware that it requires a lot of repairs before it is in a sellable condition. First she decides she need to deal with the trees and calls a local tree surgeon, Eve. Eve advises her that removing the trees could cause the house to fall down and the house itself needs a huge amount of work. After Eve leaves, Annette, in desperation and after a little too much wine, locates her father’s old saw and tries to fell the trees herself, with the spirits of her desperate parents watching on.

As the novel unfolds, switching between 1963 and the present, we learn why Annette wants rid of the house, a result of the damaged childhood she experienced caused unwittingly by her mother and father. Annette was never properly told that her mother was gravely ill and had been advised by doctors that there was little more they could do for her. On a day out at Grange over Sands Lido (now derelict), a chance meeting between her father and a young Scot, Tim Richardson, creates a situation in her home that would have a devastating effect on her life.

Richardson appeared to have some sort of powers of healing. Unfortunately his powers were not predictable or controllable and seemed to be as much of a curse to him as an asset. There was certainly something intriguing and unusual about the young man that had led him to have an itinerant life, drifting from area to area, job to job. He is charming and charismatic and has the air of a con man or charlatan. At the Lido he took hold of Jack’s head and Jack’s eyesight suddenly became perfect after a lifetime of short sightedness; if he could cure his eyesight, Jack wondered, could there be hope for Netty?

Invited back to their boarding house for Sunday lunch, Richardson sensed an opportunity to obtain a comfortable life and home for himself. Netty, who underwent treatment in Manchester undertaken in a cold and impersonal manner, has full faith in Richardson. Jack wants to fully believe in him but cannot bring himself to do so. As time goes on he is unable to make the decision to oust Richardson from the home. Although the Sycamores is his house, inherited in an already poor condition from his parents, it is Netty who is the leader and decision maker in the family. Annette is told to amuse herself, keep quiet and out of the way; she is increasingly overlooked as Netty’s illness progresses.

Jack and Netty focus their full attention on Richardson. They give notice to the other residents and are left alone with Richardson and their daughter in the house. Richardson has his own ambitions to become a bespoke tailor and decides to make Jack an Italian-style shirt using Netty’s sewing machine. While he is doing this they wait for his ‘treatment’ to work, Netty with full faith in his abilities and Jack wanting to believe but still torn by an underlying scepticism about Richardson’s powers. His personal battle between science and faith creates tension between him and Netty.

Candy, who regularly visits with home-made food, expresses her concern for Annette, noting that they haven’t fully told her about her mother. She warns this could have a lasting effect on the child but her parents have invested so much faith and hope in Richardson that they do not heed her warnings. The spirits of Annette’s parents look on powerlessly at the course of past events, and actions they cannot change, with sadness and regret.

In the background to this is the ever changing Morecambe Bay with its shifting sands, currents and weather. Netty expresses a desire to do the cross bay walk with the Queen’s Guide but her health is now fading and this will remain an unfulfilled wish. Annette stays quiet and out of the way while the unhealthy co-dependent relationship between her parents and Richardson continues towards an inevitable and tragic end. Back in the present and desperate to do anything to help their daughter, Jack and Netty focus what little power they have to help Annette, the result of which brings Eve and her family into her life and helps to resolve the issue with the Sycamores.

This is an engrossing and atmospheric novel, uncanny and unsettling. The changing nature and atmosphere of the Bay reflects this; the changes in the sands and currents turning area of the Bay from safe to deadly beneath the water, the liminal zone between land and sea, life and death, the mortal and spirit world. The story of Netty and Jack also reflects the story of Baucis and Philemon* from classical mythology, stories where the corporeal and spirit worlds interact.

Annette, her parents and Richardson all face the disappointment of unfulfilled hopes and lives. The Sycamores was never fully repaired all the time Jack and Netty ran it and it did not provide the life (and income) they had hoped for when they got married. Annette is thought of as ‘cow like’ by her father and appears to exist in his and Netty’s lives instead being as a full part of it. Richardson knows he will remain a drifter for all his ambitions, a fate that befalls Annette when she grows up. Eve’s family, her partner and young son, help counter this and their intervention in Annette’s life gives some hope for a better future for her. It is this hope for the future that provides a release for Annette, her parents and the ghosts of the past.

*Philemon and Baucis were a Phrygian couple who lived modestly. One night a couple of travellers came to their door asking for shelter. The couple willingly made them welcome and shared all the food and wine they had in the house with them. During the course of the evening they noticed that the food and wine were not running out and realised that these wayfarers were really Gods in disguise. They were correct; the travellers were Zeus and Hermes. They had travelled through the area asking for shelter but had been rudely turned away by all other households until they came to the couple’s home. Realising they had been recognised Zeus and Hermes stopped the couple from killing their precious goose (they had feared their fare was not good enough for Gods) and rewarded them by turning their home into a temple. The people who had not shown hospitality faced the wrath of Zeus who sent a great flood to sweep them away. When Philemon and Baucis finally died they turned into an entwined oak and linden tree, remaining together and a part of each other in death as they had in life.