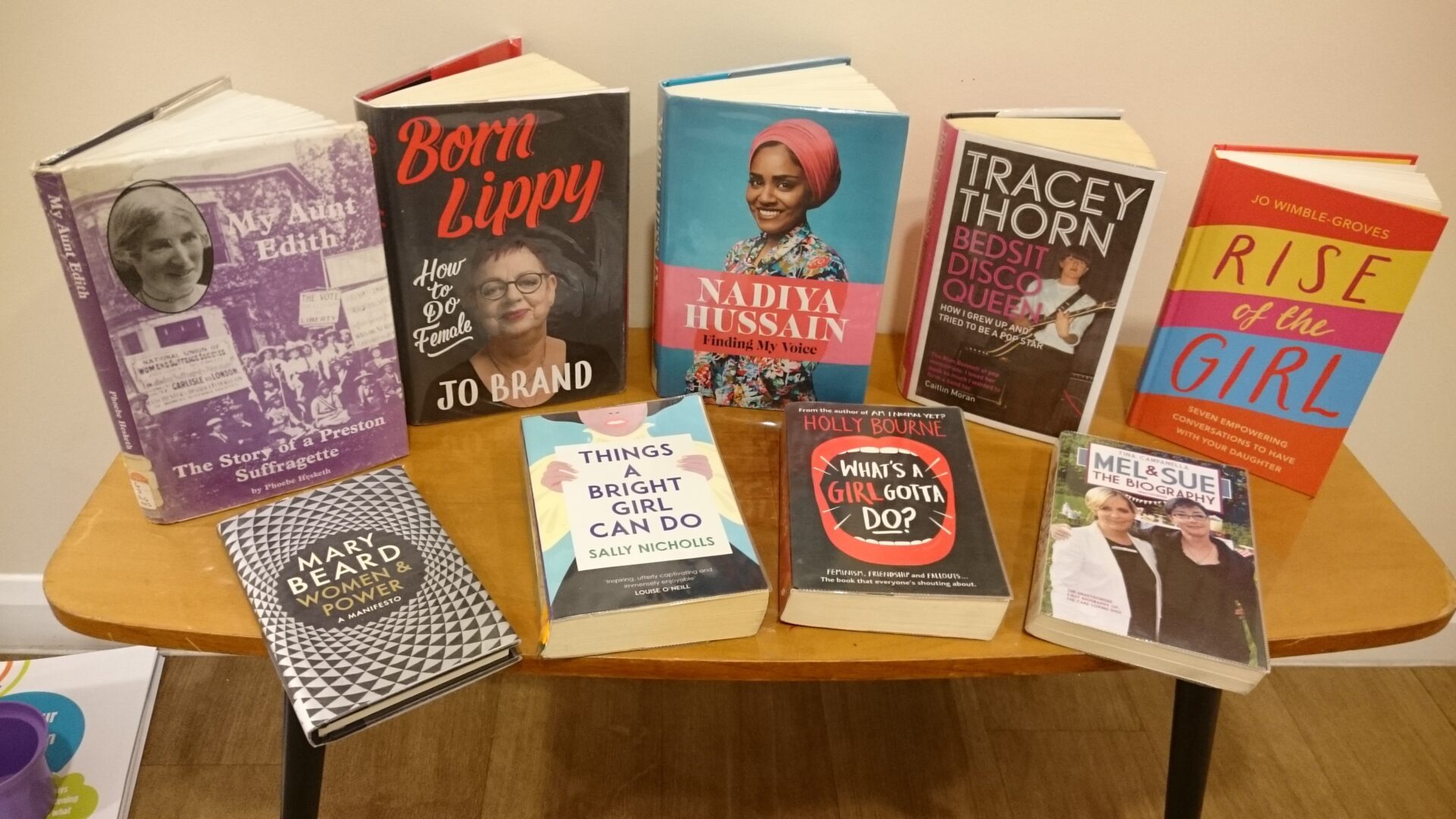 Celebrate the day with this inspirational young adult novel, Moxie by Jennifer Mathieu.

It would be safe to say that 16-year-old Vivian Carter could be described as a ‘good kid’. She is not troublesome, or argumentative, does her schoolwork, is a good student and has a good relationship with her family. They consist of her mother and her mother’s parents. Vivian’s father had died in a motorcycle accident when she was a baby.

However being a good kid doesn’t mean being conventional. She had already discovered a box labelled ‘misspent youth’ belonging to her mother and dating from the 90s. She had been, in contrast to Vivian, pretty rebellious causing worry to her parents. She had been a Riot Grrrl, heavily into Punk and Feminism. The box’s contents include hand-made punk magazines, or zines, made by fans and passed around by them, this being a time before social media and when the internet was not widely used. Vivian may not have adopted the rebellious lifestyle but she certainly likes the fashion and music; their cat is named Joan Jett, after the lead singer of the band the Black Hearts and she enjoys listening to bands her mother was into, such as Bikini Kill.

She does fit in with her peer group in her home town, East Rockport, Texas, a place which is as conventional and conservative as can possibly be. At East Rockport High School it’s the Football Team who rule and are put on pedestals, and don’t the Football Team just know it! Mitchell Wilson is the leader of the Team and, as his father is the Principal of the School, he and his teammates can get away with arrogant, offensive and sexist behaviour. The rest of the teaching staff also turn a blind eye to the team’s behaviour, brushing it off as banter and jokes if anyone complains. Female students have had to suffer in silence for years as this Jock Culture has become deeply ingrained and no criticism is tolerated towards the Team. They are not only the pride of the school but the pride of East Rockport itself.

When a new student in Vivian’s class, Lucy Hernandez, is silenced by Wilson with the comment ‘make me a sandwich’ (meaning, you should be in the kitchen) when she tries to speak in class, Vivian feels a familiar anger and frustration welling up inside her. Then the teacher fails to deal with the interrupters and further silences Lucy, who tries to reason with him, by punishing the whole class with extra work. Later that day, when Vivian is having dinner with her grandparents, she discusses this incident with them. They tell her that her mother, who also went to East Rockport High, would have protested around the school.

Vivian’s mother returned to East Rockport, a small town place that she had escaped from, after her husband died. She is a nurse and has brought up Vivian by herself with the help and support of her parents. Having just one parent, and one who is not as conservative in her views as the average resident of East Rockport, has made her and Vivian very close. However the upcoming events at the school, Vivian entering young adulthood and a fledgling relationship with a colleague who happens to be (to Vivian’s horror) a Republican, will put a bit on strain on their relationship.

For Vivian the humiliation of Lucy is the final straw. Inspired by her mother’s collection of zines she creates Moxie, which she distributes throughout the school early one morning before students and staff arrive. Uncertain whether it will have any impact she decides not put her name on it. Through it she asks if girls are sick of the comments and behaviour of the Jocks in the school (and the teacher’s unwillingness to stop them). Vivian calls for a small act of protest – to come to school with hearts and stars on drawn on hands. As Vivian does not have a reputation of being a so-called ‘troublemaker’ her best friend, Claudia, and the rest of the school, do not suspect her as the author of Moxie. Lucy, whose old school in Houston had a feminist society, is excited and enthusiastic at the publication and its call to arms, ‘Moxie Girls Fight Back!’

From this small start the Moxie movement takes on a life of its own rattling both the Jocks and the Principal who do not like the status quo being challenged one little bit! Vivian and her peers find courage and solidarity to fight the sexism and double-standards in their midst, to fight for justice and change. It’s not all serious stuff for Vivian as a new student, Seth Acosta, from liberal Austin, makes Vivian’s heart beat faster. Seth also proves to be a sympathetic ally and proof that not all the guys at East Rockport High are like Mitchell Wilson and his gang.

This novel is refreshingly free of ‘mean girls’ and ‘frenemies’, rather it celebrates female solidarity and friendship, that strength comes with a common cause. East Rockport High friendship groups have been divided by fashions and interests, but they’ve also been divided on racial lines. This really starts hitting home with Vivian as she rekindles an old friendship with Kiera thanks to Moxie’s campaigning and support for the Soccer Team, of which Keira is a member. They had been close friends in junior school but had drifted apart and into separate friendship groups in High school. Moxie is instrumental in breaking down of barriers between female students who realise that they do not have to carry on taking the daily and yearly grind of demeaning behaviour and rules, behaviour that is not merely nuisance but progressed into something far darker and serious. Vivian could never have guessed what would be revealed in the wake of her producing Moxie, but it helped change the lives for all of them for the better.